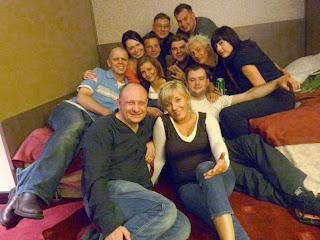 The 6th June was 4TH OSKAR ART-ROCK FESTIVAL in Konin. The largest venue of our tour with Riverside headlining. Riverside had some last minute changes and were not able to make the event. Still, with a good crowd lined up waiting for the doors to open, we felt that this was going to be a good night for us. First up were a Polish band called Lilith, a heavy goth/prog/rock band with a huge sound and a singer with a wonderful angelic sounding voice. Next, our good friends Grendel performed and this time they had bass player Cezary join them for a full band sound with a few songs that were not played on the previous 2 nights. We took to the stage at last and to our surprise, at least half the audience rushed to the front of the stage making it a very noisy and memerable concert for us. After we had finished it was time to pack away and move on to our hotel for the night. Witek, our promoter, had decided on hiring a few chalets out in the countryside for all the bands to stay in. From, at first sight, looked like the set from the movie 'Friday the 13th' became another lovely night as the members from each band all met up for a bit of a party into the small hours.

Next morning, after what felt like about 30 minutes sleep, we headed to Poznan for the final gig of the short tour. The 'Blue Note' club seemed an odd choice for a progressive rock band to play but as it turned out, it was probably our highlight of the tour. A very intimate venue, a world apart from the previous night, was full to the rafters and the audience were buzzing. A major concern earlier in the day was that because of the never ending amounts of dry ice being pumped on stage throughout the previous night, Stuart had a severe sore throat that meant he could hardly talk, let alone sing!!! It was when the band took to the stage that the 'spirit of performance' that has done the band so proud over the last few years, REALLY shone through. Although Stuart was really struggling to get enough out of his voice, his total commitment to putting on a good show paid off with what was probably the 'performance' of the tour.

Packing up the gear for the last time was probably as slow as it could ever be and then we headed back at the hotel. The Grendel members set about organising one last party for us. Although there were only a few hours left before leaving for the airport, Stu, Roy, Spencer and Dean spent the last couple of hours with our wonderful support band.

Next year, if all goes according to plan, we will again be touring Poland and hopefully, Grendel will be coming along for the duration with us again. With next year being Galahad's 25th anniversary, alot has to be planned for a very very busy year........
Posted by GalahadsKeys at 07:37